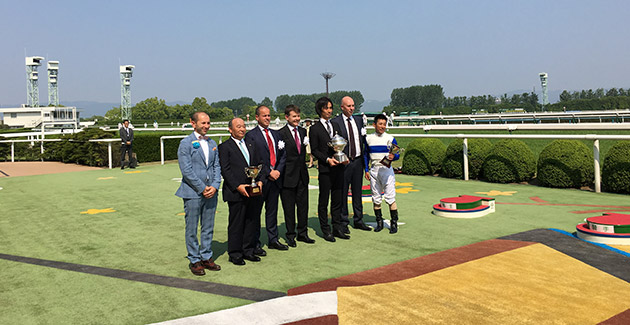 The club’s resident Japanophiles, Matt Cain and Josh Rodder, have been visiting trainers and owners across the Land of the Rising Sun in an effort to recruit horses to run in races across this year’s BMW Caulfield Cup Carnival.

Matt and Josh’s great relationships throughout Japan have garnered significant representation from the Pacific island nation at Caulfield in recent years. Who could forget Admire Rakti’s famous victory in the 2014 Caulfield Cup (in which compatriot Bande was an unfortunate eleventh-hour scratching), along with Admire Inazuma, who ran in the Moonga Stakes. This was repeated last year, when Fame Game was a popular elect in the Cup, in which he was joined by Hokko Brave.

More importantly, Matt and Josh’s deeds have forged particularly strong relations and high levels of respect between the world-leading Japan Racing Association (JRA), its constituent trainers and owners, and the MRC.

In exciting news for the club, this mutual respect and fortified relationship is set to bear even more fruit in 2016. That is because the Caulfield Cup is set to become one of just a handful of the world’s great races run outside of Japan that the JRA will televise and permit its nation of racing-mad customers to bet on.

The club’s Chairman and CEO, Mike Symons and Brodie Arnhold, were recently in Japan to discuss this Caulfield Cup simulcast arrangement with key representatives from the JRA. This deal also looms as a significant financial windfall for the MRC, given the scale of the Japanese wagering market the club will recoup a percentage of turnover from.

Mike and Brodie were able to conduct these discussions to correspond with the day on which the JRA acknowledges its sister clubs in Australian, of which the MRC is one. In keeping with respect for Japanese culture, it was considered important for the club to be represented by its chairman and CEO, particularly in the context of the burgeoning commercial relationship between the two entities. This was appreciated greatly by our Japanese counterparts.

It is the JRA’s strong preference for the new suite of international races it simulcasts to include runners from Japan, so the club delegates’ contact there this year is particularly crucial for the success of the relationship, hence the club’s concerted efforts.

The simulcast arrangement with the JRA is an important element in a broader international media rights strategy the club is embarking on in 2016. Until now, Sky Channel were afforded the right to distribute vision of the MRC’s races to relevant racing jurisdictions around the world, which it did under a generic ‘Australia’ banner, and of which it retained 50% of generated revenue (based on wagering turnover).

Now, for the first time, the MRC has elected to distribute vision of its racing directly to those jurisdictions abroad. This will see the club recouping all of the revenue generated by people betting on the MRC’s racing product internationally, with the added bonus of being able to grow the renown of its racecourses and racing brand globally.

It’s certainly an exciting time for the club – particularly, the prospect of hosting some Japanese friends at Caulfield this October.