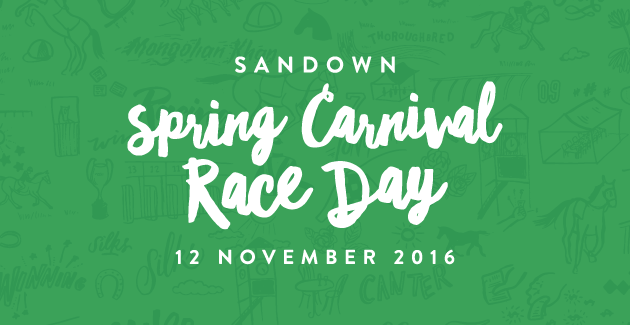 Nestled deep in the south-eastern suburbs, Sandown may not have the profile of its three Metropolitan ‘cousins’, but its feature day of the Melbourne Spring Carnival is a classic. With all ‘black type’ races on a ten race card, including five Group races, it is a day that rivals many of Melbourne’s feature race days. Not many people would know that racing actually began here in 1888, on a privately owned track, known as Oakleigh Park Racecourse. The track was closed in 1931 and reopened as it is today in 1965. Let’s take a look at a cracking day of racing.

R1 Thoroughbred Club Merson Cooper Stakes (Listed 2YO 1000m) We kick the day off with a great race for the 2YOs. Of those that have started, SA visitor Mikuni was strong on debut (2nd) and looks hard to beat, Artic Angel wasn’t far off a strong field on debut and Explicitly comes out of a fast 2YO race back in October and has trialled ok since then (2nd). Of the newbies, Herrera, Vinland and My Mother Says all looked strong winning their respective trials and Fully Maxed was just on the heels of Explicitly in that trial so has some form reference. For the rest, best to watch betting! Sandown Sound Out Says: Mikuni 1st/Artic Angel 2nd/My Mother Says 3rd

R2 Yarramalong Racing Club Stakes (Group 3 1500m) Small field yet a strong race. Royal Rapture was in stunning form early in Spring before trying his luck at Group 1 level and was certainly not disgraced. Hard not to like him back in this grade. Ex-Hong Kong runner Redkirk Warrior showed real promise in his first Aussie start, just missing late over 1200m. Up to 1500m and in this grade will suit. Soveriegn Nation does jump in grade, but was good behind a smart gallope and is well weighted/drawn here. Stratum Star is a proven Group 1 performer that cant be discounted in this grade and Slightly Sweet has drawn a tricky gate, but is a much better horse than her form suggests. Sandown Sound Out Says: Royal Rapture 1st/ Redkirk Warrior 2nd/ Sovereign Nation 3rd.

R3 Ladbrokes Sandown Cup (Listed 3200m) One of the few 3200m black type races in Australia with a good field. Really hard to go past Qewy. He was strong winning the Geelong Cup (form race of the Spring!) before his gallant 4th placing in the Melbourne Cup. De Little Engine comes back in grade here after a couple of solid performances in Group class over the Melbourne Cup carnival. He was really good late behind Jameka in the Caulfield Cup so 3200m looks ideal now. Murphy’s Delight has a great record over this trip and hit the line well over 2800m last start suggesting he is ready. Bring Something is having his first go over this trip, but definitely showed he wanted further in a solid run over 2400m last start so could bob up at odds. Four Carat is likely to be an improver over 3200m and All I Survey comes out of that hot Geelong Cup so might be a player at odds. Sandown Sound Out Says: Qewy 1st/De Little Engine 2nd/ Murphy’s Delight 3rd.

R4 OTI Racing Doveton Stakes (Listed 1000m) Good little sprint race with a host of chances. O’Malley was super impressive in winning last start so is the top pick. Vezalay’s last start 15th wont jump off the page at you, but it was up the Flemington straight (only 4L off) which didn’t suit her. Based on her run prior, she is right in this. Jungle Edge will be the likely leader here and wasn’t far off O’Malley last start so is amongst the chances. Brockhoff is a likely improver 2nd up and down in weight, while Husson Eagle has an impressive record 1st up and has trialled ok. Sandown Sound Out Says: O’Malley 1st/Vezalay 2nd/ Jungle Edge 3rd

R5 City Of Greater Dandenong Stakes (Listed 3YOF 1400m) Strong race for the 3YO girls here with lots of chances. Prompt Resposne looks hard to beat. She has been really good her last two starts (both 2nd) in this grade, beaten on the line both times. Petition is still a maiden, but was super behind an in-form mare last start (who has won again since) so is hard to ignore. Hear The Chant got a little lost up the Flemington straight last start after a sound win at Caufield in Group 3 level prior. Up to 1400m should suit her. Want To Rock jumps sharply in grade after her last start win, but the horse she beat nearly won a Listed race next start so the form has held up. Moonlites Choice faces a huge jump in grade, but how can you ignore an undefeated Darren Weir filly? Sandown Sound Out Says: Prompt Response 1st/ Petition 2nd/Hear The Chant 3rd

Jennifer Lynn has been impressive winning her last three, including a dominnat Listed grade win last start over 1400m. 1600m will really suit her.  It’s hard not to be impressed by Ruthven’s career to date with 2 strong wins. He is jumping in grade, but looks promising. Benz appeared to peak a little late over 1400m, but was forced to go forward from a wide draw. If he gets a quieter ride here he could be a key player. Morton’s Fork was really good to the line over 1600m in a strong Group 3 last start, and whilst up in grade, the smaller field and nice draw will help his chances. Fomo has a big ask in this grade, but the natural leader could give a great sight and cause the upset. Sandown Sound Out Says: Jennifer Lynn 1st/Ruthven 2nd/Morton’s Fork 3rd

Who Shot Thebarman won this race last year and comes into this after a similar performance in the Melbourne Cup to last year.  Almoonqith was really good to the line late in the big Cups and will certainly appreciate the drop in grade. Assign won well at Caulfield over 2400m but then peaked on his run in the Cup. Back to 2400m will suit. Big Orange all but won the 2015 Melbourne Cup before heading back home and having a really strong European summer that netted a number of Group level staying wins. He never fired in this year’s Cup, but he is very talented and shouldn’t be irgnored. Secret Number’s 2015 Melbourne cameo produced a super 2nd in a hot 2600m race before he headed back home to the UK. The lightly raced runner only had one run into the 2016 Melbourne Cup and he really looked flat finishing back in the field. He is sure to be an improver 2nd up. Beautiful Romance had a fairly good European summner before coming out here to try her luck in the Melbourne Cup, where she arguably had one of the best runs in the race behind the place getters. She does come back to 2400m, but she is a classy mare with a huge chance. So Si Bon has a big ask but will relish the 2400m. Sandown Sound Out Says: Who Shot Thebarman 1st/Almoonqith 2nd/Big Orange 3rd.

R8 Kevin Heffernan Stakes (Group 3 WFA 1300m) Hot little mid-distance range Group 3 race. Illustrious Lad certainly looks the stand out. The in-form sprinter beat a strong Group 2 field over 1200m last start. Does rise in weight but is in great form. Faatinah is a natural leader that will be setting the pace and only just missed in a similar field last start over 1200m. Yet to race over this trip, but is talented. Lucky Hussler and Under The Lourve are proven Group 1 performers that should be repsected in this grade, while Famous Seamus has a great record over this trip and comes into this on the back of a strong Listed grade win. Burning Front is sure to improve 2nd up and Durendal has been there abouts all Spring in higher grades so will appreciate the drop to Group 3. Sandown Sound Out Says: Illustrious Lad 1st/Faatinah 2nd/Durendal 3rd

R9 Mypunter.com Eclipse Stakes (Group 3 1800m) Big field full with a host of runners coming out of the same race. Tucanchoo was 2nd in that race and, 3rd up now, is sure to have reached full fitness and will be hard to beat. Alaskan Rose was ultra impressive late in a hot Group 2 mares race over 2000m last start. She is unbeaten on this track and looks well placed. Cool Chap jumped up to this trip for the first time last start and was just beaten on the line late. Stays at 1800m which is interesting, but the leader will be in this for a long way. Plot The Course was shuffled right back in that Tucanchoo race, but did hit the line well. With a better draw here he is right in this. High Church is sure to improve 2nd up and Desert Jueney was 3rd behind Tucanchoo and could be your value runner. Sandown Sound Out Says: Tucanchoo 1st/Alaskan Rose 2nd/Cool Chap 3rd

R10 Le Pine Funerals Summoned Stakes (Group 3 Mares 1500m) The last of a big day of racing. Extensible just cant seem to run a bad race of late and comes into this after a solid 3rd over 1600m in this grade. The same could be said for Silent Sedition. She is in great form and just missed late (3rd) in a strong Group 3 last start. Metaphorical hasn’t been far off in some good races over similar trips this Spring and certainly is right in this. Shillelagh was great over 1400m in this grade last start and will be really suited by 1500m. A few last start winners jump right in grade but shouldn’t be discounted based on how well they won their last race. This includes Weather The Storm, Mossbeat, Miles of Krishan and Vital Importance. Good luck in a tough race! Sandown Sound Out Says: Extensible 1st/Silent Sedition 2nd/ Metaphorial 3rd/Shillelagh 4th.