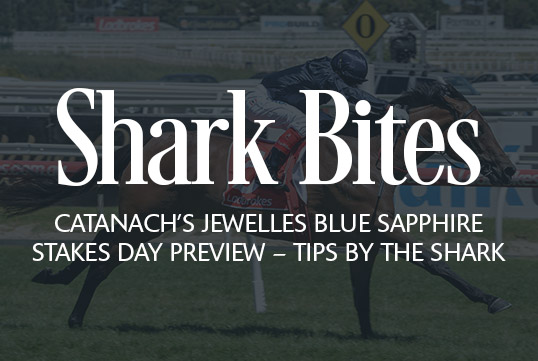 You’ve got to give it to the Melbourne Racing Club.

Not only has the decision to move the Thousand Guineas to Caulfield Guineas day provided the extra dollop of rich, velvety cream on an already glorious cake, the creation of the Blue Sapphire meant that the Wednesday leg of the three-day Caulfield Cup Carnival was maintained.

I’m sure the executives at Caulfield won’t admit it – publicly anyway – but there’s only one reason why the Club kept the Wednesday meeting going; to encourage that great Australian tradition of the sickie.

You know what I mean. Wednesday’s Catanach’s Jeweller’s Blue Sapphire Stakes meeting has had a big red circle around it in your diary for months now. Maybe even a long standing “appointment” written in code. Go on. Admit it.

Whether it’s skipping work, university, your Great Aunty’s funeral, or your son’s starring role in Malvern High School’s adaptation of Cats, we all have something we’re willing to forego to celebrate the fact that we’re Australians, it’s Wednesday and there’s a bloody great race meeting on.

While you sort out your excuse for leaving that board meeting early on Wednesday, I’ll handle the form to give you a head start on a couple to consider.

Although last start five-length Benalla maiden winner VILLERMONT looks awfully hard to beat in race 3, give some consideration to CIRCOMO at $14. Circomo has been thumping the line in maiden races over shorter distances and was heavily backed to win a similar race at Flemington a fortnight ago before being withdrawn with a minor issue. Villermont may well win the race, but Circomo is not without a chance.

Surely FLYING JESS gets her chance to break through this preparation in race 5. The John Moloney trained mare is absolutely flying this preparation and put up a mighty final 600m at Moonee Valley last start when chasing I Am A Star off a tempo that didn’t suit. She’s ready now as is PROMPT RESPONSE.

I was fortunate enough to be at Lindsay Park Euroa a couple of weeks ago for a gallop morning and FORMALITY really caught my eye. The filly had the better of Alizee and Champagne Cuddles in Sydney before a tough run in the Golden Rose, she will be very hard to beat in race 6, the G3 Blue Sapphire Stakes.